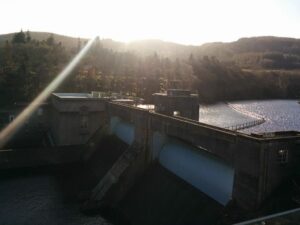 A main attraction in Pitlochry is the Pitlochry Dam Visitor Centre. Opened in early 2017 it includes a selection of exhibitions telling you about the heritage of the dam and its functions as a hydro dam and salmon ladder. There is also a great cafe!

The dam and salmon ladder opened in 1952. It was constructed with a salmon ladder built into it after an act of parliament in 1943 ruled the hydro board had to preserve fish stocks in the waterways used to generate power.

The dam and power station took four years to complete with many problems during the process such as flooding and strikes by the workforce over poor quality food. Nowadays this dams two turbines generate enough power for 15,000 homes and it is one of nine power stations located in Tummel Valley.

The fish ladder consists of 34 pools, each 50cm higher than the previous and covering over 300m in length. Each pool also has an opening 1 metre below water level, allowing fish entry to the next pool. Three larger pools exist to enabling the fish to rest during their journey and large windows allow visitor to observe the fish.

Your sure to enjoy the various videos and interactive exhibition at the visitor centre. The exhibition takes you from before construction right up to date, detailing what is done to preserve the the habitat whilst generating green energy.

Relax and enjoy the home from home atmosphere at our guest house near Pitlochry.